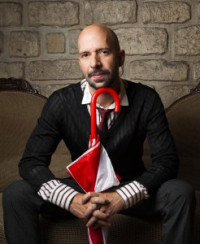 Today, Neil Strauss leads a life that many envy. He is successful, he has access to the biggest celebrities and musicians in the world, and he has eight bestselling books, movie deals, and television deals.

But it wasn’t always like this. There was a time when he was lonely and felt unfulfilled. You might feel this way yourself.

Neil Strauss built his life of success and adventure by understanding that you always need to understand the rules of the game you are playing. Whether you’re talking about a video game, a social interaction, a financial plan, or career advancement, there are rules and strategies that influence everything we do. But most people don’t take the time to learn and follow these rules.

Neil Strauss originally attracted national attention with his insightful and illuminating musician and celebrity interviews in The New York Times and Rolling Stone. He didn’t wander into an interview and chat, blindly tossing off questions and simply hoping for a good response. He intensely studied human communication, he examined the rules of how we interact with each other, and he ruthlessly evaluated his own performance. As a result, he got the dirt no other writer got. He went shopping for diapers with Snoop Dogg, he spent the night in Jewel’s bed, he flew in Madonna’s helicopter.

His book publications came out of this same strategy of objectively studying the rules of interaction and positioning himself for successful outcomes. Many celebrity ghostwriters only get the briefest interaction with their subject. They’re left to rehash press releases and magazine articles. Strauss employed his skills at rapport and relationship building to get an unprecedented level of access. He lived in Dave Navarro’s house. He learned things that Jenna Jameson had never shared with anyone.

When Neil Strauss turned his attention improving his social life, he applied the same philosophy. This isn’t magic, this isn’t impossible, he thought. It can be learned. The rules can be identified, learned, and adapted just like a sport or any other skills. His transformation from being lonely and dateless into the world’s greatest pickup artist was documented in 2005’s international bestseller The Game: Penetrating the Secret Society of Pickup Artists.

He followed up that smash hit with the 2007 publication of Rules of the Game. Originally issued as a limited edition two volume boxed set, this bestselling book featured a volume dedicated to “The Stylelife Challenge” and “The Style Diaries.” The challenge volume laid out, in prescriptive detail, a 30-day challenge plan for making immediate and tangible improvements in meeting women. The diary volume shared a number of explicit, sometimes hair-raising tales from the field.

An expanded version of Rules of the Game was re-released in 2009. It contained the proven 30-day challenge content, the field reports section, and included, for the first time, “The Routines Collection.” This material included word-for-word scripts on some of the most successful routines, openers, and ways to meet women. It also proves scientifically that men shouldn’t worry about a woman hearing an opener previously. You’re not going to be “caught.”

Neil Strauss’ biography is a list of achievement and successes, made possible by his understanding of the rules of the game. Whatever you’re “playing” there is a method, a learn-able process, that enables you to be the best.

Tag: Neil Strauss, Rules Of The Game, The Game